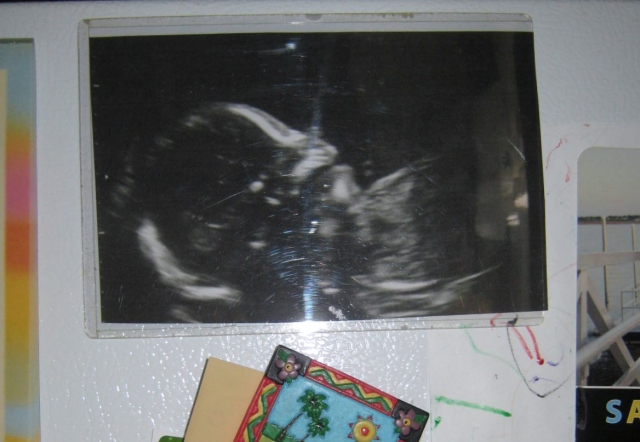 This is a photo of the confusion of magnets, artwork and bits of paper on the side of my refrigerator. The shining star of the assemblage is the ultrasound photograph of my new grand-daughter, due in a few months; I already pray and think of her daily.

There are other precious babies, as yet unborn, who are in jeopardy of ever having a chance to walk this earth. Wouldn’t it be great if the mainstream media, newspapers, social media sites, and radio hosts would give as much time to saving them as they have to condemning the alleged abuses of a handful of men in the NFL ? I am not in any way condoning or diminishing the abusive behavior exhibited in the incidents, I’m just wishing as much verbal and written bravado was shown toward saving the unborn.  It also would be encouraging to have several politicians actually fighting to diminish the ease with which the unborn are terminated rather than just giving “lip-service” to the pro-life movement.

Hmmmm…I just caught myself in my own net of condemnation, because isn’t that exactly what I am doing here…only stating the obvious? Speaking out against abortion is at least a toeing-up to the starting line. What are you saying or doing about the horror of abortion…anything at all?

And a thank you to my cousin Lisa, for opening up my eyes to the fact that I need to do more to uphold the right-to-life of the unborn.

2 thoughts on “Perspective – The NFL & The Unborn Child”