One morning this week, the sun shone warm and bright; a perfect day to go to the park and feed the birds. The ducks, a few adults and several ducklings, were appreciative of the bread and stale cereal we fed them. Afterwards, we walked the few hundred feet to the playground. As my grandchildren climbed aboard the ladders and slides I spied something odd in the scene. 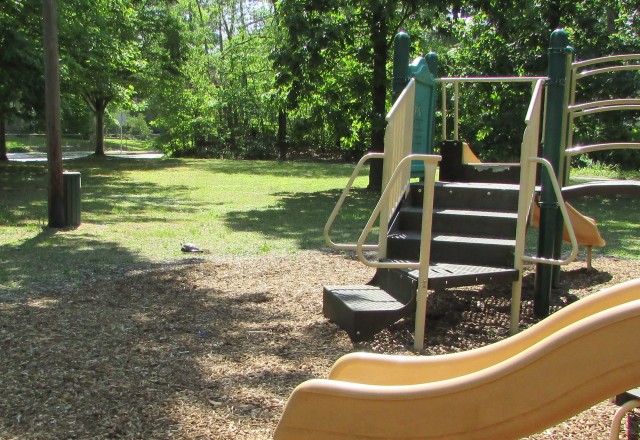 At first glance I thought it was  a snapping turtle, but noticed the smooth shell and markings of its head and underbelly, the turtle was the painted variety, not the dangerous snapper.

The turtle was about the length of half a football field from the lake. She lay in a depression in the dirt digging with her hind feet. I zoomed in with my camera and spotted an egg being laid. 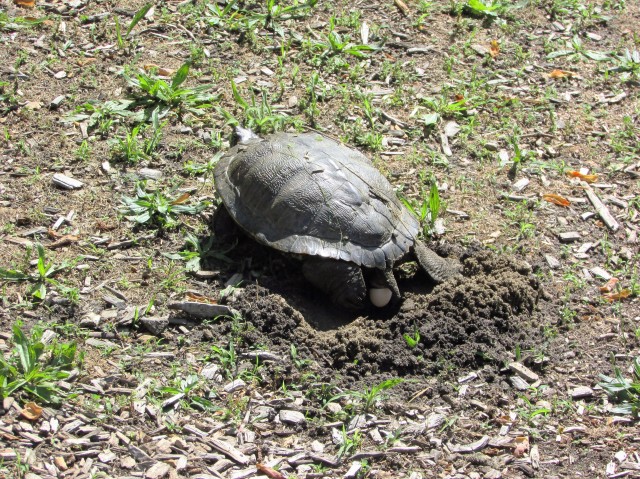 She seemed quite oblivious to the close proximity and commotion created by the children, and lay several eggs while the children played. I was thrilled to be able to see her laying eggs in person. Usually that type of an experience is only available through wildlife channels on television.

“The painted turtle (Chrysemys picta) is the most widespread native turtle of North America. It lives in slow-moving fresh waters, from southern Canada to Louisiana and northern Mexico, and from the Atlantic to the Pacific. The turtle is the only species of the genus Chrysemys, which is part of the pond turtle family Emydidae. Fossils show that the painted turtle existed 15 million years ago. Four regionally based subspecies (the eastern, midland, southern, and western) evolved during the last ice age.” ~ Wikipedia

"For physical training is of some value, but godliness has value for all things, holding promise for both the present life and the life to come."
~ I Timothy 4:8