Recharging…Resting…Rejuvenating… In the meantime, I’m re-blogging some of my best garden posts. Happy Spring!

I hope the photograph shows the deep hole in my Square Foot Garden. My peas were just beginning to sprout when some type of marauding critter decided to make them a meal. 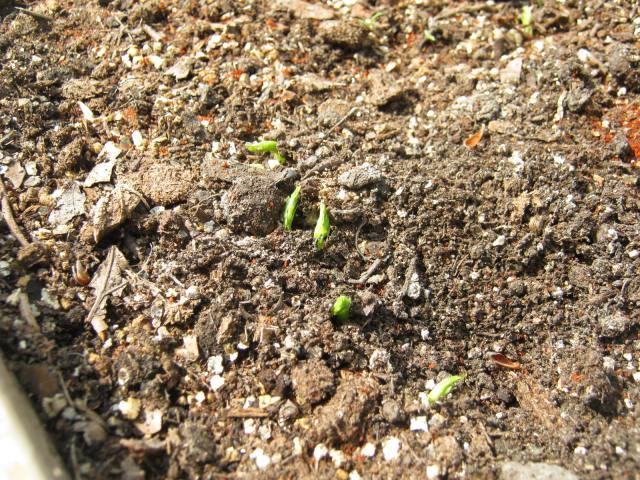 Something large and furry had to be the culprit, or could it have been something large and feathery? My first impulse was to blame the squirrels, but they have been in the yard with my Square Foot Garden for several weeks and have not ventured past the chicken wire enclosing it. The same day I saw the devastation in the garden, I spotted a large chipmunk running around the yard. I know they are cute, but chipmunks are tops on my problem wildlife list. They are voracious and destructive and actually can be dangerous. My neighbor broke her wrist a summer or two ago by catching her foot in a chipmunk burrow and falling. One summer our yard became so overrun the chipmunks scavenged relentlessly even when we were only a few feet away. Wild turkeys have visited my yard too, but thankfully, only once. Yesterday I saw the mallard ducks. They are back. Every spring they return to my yard. Why? To eat beneath the birdfeeder, and then for dessert feast on every fish they can scoop up in my pond. The ducks have become a pest too and are able to easily fly over the chicken wire and gobble up my sprouting peas and greens.

So the big question is what to do to fight them. I have had mixed results in past years. The bug spray I made a few days ago might repel the animals, but the ducks don’t have a sense of smell and will not be stopped by a repellent scent. I also must reapply every time it rains, and if I don’t get out there and re-spray within five minutes of rain stopping, the hungry pests might get there first.

My first weapon was applied immediately, chile powder straight out of the bottle. I have some dried chiles still on hand, and I will blend those and keep at the ready to spread around. So far this has repelled whatever it was that dug up the peas.

I am also a firm believer in scare tactics. Anyone who has lived beside me might know that when I see something near sprouting plants I might run outside roaring like a lion in attempts to scare them away. It works. It also sends my heart rate pounding. I don’t know how wise it is to sprint and roar like this, but hey, it works. I also came up with a few temporary and permanent solutions. Tomorrow I’ll post the permanent solution, but for today, the temporary solution is the focus.

Water balloons. They are at the ready in a basket, filled with water and bit of garlic powder for a little added punch. If I see one of the culprits in or near my garden, they are in for a surprise. Tee-hee! I just hope tomorrow’s newspaper headlines don’t read: “Grandmother falls out second story window lobbing water balloons at wildlife.”

IMPORTANT CAUTION: Balloons can be lethal to small children because they are a choking hazard. Make sure to remove all shreds of balloons out of your yard.

Update on Water Balloons: Lobbing them out of the upstairs window didn’t work. I couldn’t get enough “oomph” behind my arm to really launch them well. I moved the basket of balloons out onto the back porch. I had decided that the marauding critters get “baptized” with the water balloons only if they get in the vicinity of my gardens. Uh-oh, sooner or later the nibbling rabbit got too close. Tee-hee! I let a balloon soar through air. It bounced down and burst near enough to him to spray him with water. He ran…hooray! It works. The bunny was very surprised…not hurt. Next was a squirrel. He moved much quicker than the bunny. I think he saw the water balloon coming, but he was sprinkled with a few drops too, and I did not see him back, at least not yet.

Garden Wars weapon number two is recycled CD’s. I strung glass beads, a few metal bells, and some old crystal necklace beads onto wire. I then loaded the inside of a computer CD with goop, put a paper clip at the top, extending a bit past the edge, and added three seven to nine-inch wires to the bottom of each CD. I pressed a second CD onto this arrangement, making sure the iridescent side of both CD’s was facing out, clothespinned the edges, and let them dry overnight. Actually, I thought they might look junky, but after I hung them on mini shepherd’s hooks beside the garden I was pleased with the way they looked. The slightest breeze sets them spinning. The reflections on the front change and swirl, the beads click a little, hopefully sounding a bit like a rattlesnake to the little critters raiding my gardens. All in all, I feel good about my preventative measures. I’ll update in a week or two and record my results. I wish you, “Happy Gardening,” and “Victory” in the “Critter Wars!”