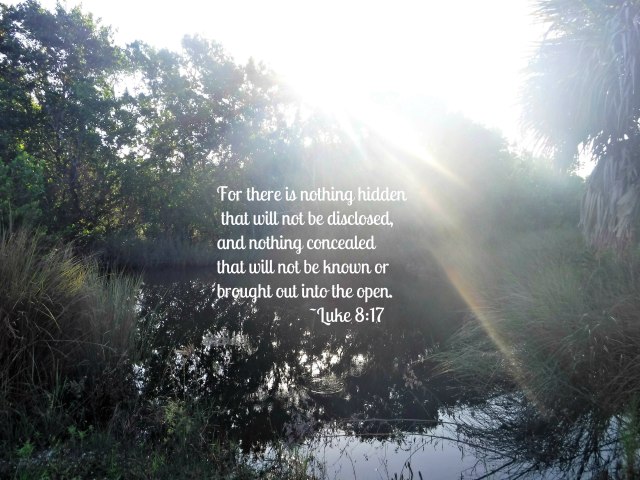 What lies beneath these dark waters?

A hint was the low rumbling bellow we heard. Alligators bellow to communicate their size. The bellows were loud and seemed close.

We stayed only a few minutes, walking across boardwalks right on top of the water, not being able to see what was in the water surrounding us, I’ve got to say, we both found it creepy. I love wildlife, but I am not going to be lured into an area where alligators roam free and might be hungry. I’ll keep my alligator viewing confined to my cable wildlife channel.

The dark water the massive predators dwell in brings to mind deceivers in the Media. Residing in the murky swamp of chicanery they bellow false narratives about the recent election in the United States. Tell me, why would someone concede victory to even one lie before seeking truth first? Even those blindly voting for an apocalyptic agenda know there has been fraud, massive fraud. How can anyone in their right mind promise a dark winter instead of pointing the way to light? My hope is that the truth, at some point in time, will be revealed. Funny isn’t it, people who voted against liberal agendas don’t seem to be burning cities down. The Media Machine, combined with other dark forces, is spreading a red carpet for evil to waltz into every aspect of our lives.

We are living in a hellish reality where good is called evil, and evil is called good.

Woe unto them that call evil good, and good evil; that put darkness for light, and light for darkness; that put bitter for sweet, and sweet for bitter! ~Isaiah 5:20

It’s akin to saying, “Wade right into that swampy water, that bellow of hatred you’re hearing is only a love call, there’s no danger there.”

I’m praying that an attitude of peace will prevail in the USA. But, I am also praying that anyone who was involved in any election voter fraud, who has not totally turned to evil and chaos, will have such an attack of conscience that they will find no rest until they try to put it right. Prayer changes things.

“Confess your faults one to another, and pray one for another, that ye may be healed. The effectual fervent prayer of a righteous man availeth much.” ~James 5:16