Today’s Throwback Thursday is a tribute to Bob Ross and his ‘Happy Little Trees.’ Bob Ross had a magnetic, upbeat personality that came right out of the television and touched your heart. I watched his show many times, and my youngest son, in his pre-teen years, painted using Bob’s techniques a few times too.

Robert Norman “Bob” Ross (October 29, 1942 – July 4, 1995) was an American painter, art instructor, and television host. He was widely known as the creator and host of The Joy of Painting, an instructional television program that aired from 1983 to 1994 on PBS in the United States, and also aired in Canada, Latin America and Europe. With a soft voice and a permed afro, Ross went from being a television personality in the ’80s and ’90s to an Internet celebrity popular with fans on YouTube and many other websites. ~ Wikipedia

Many of Bob’s videos can still be viewed on YouTube. During these long winter days and snowed-in weekends, break out some old paints and try his technique. You might amaze yourself at what you can do.
* Thanks to a comment on this post I can also add Netflix and Amazon Prime as two sources of Bob Ross Videos.

Sepia is today’s Crayola color in Color Your World – 120 Days of Crayola.

“Sepia is a reddish-brown color, named after the rich brown pigment derived from the ink sac of the common cuttlefish Sepia. The word sepia is the Latinized form of the Greek σηπία, sēpía, cuttlefish.” ~ Wikipedia 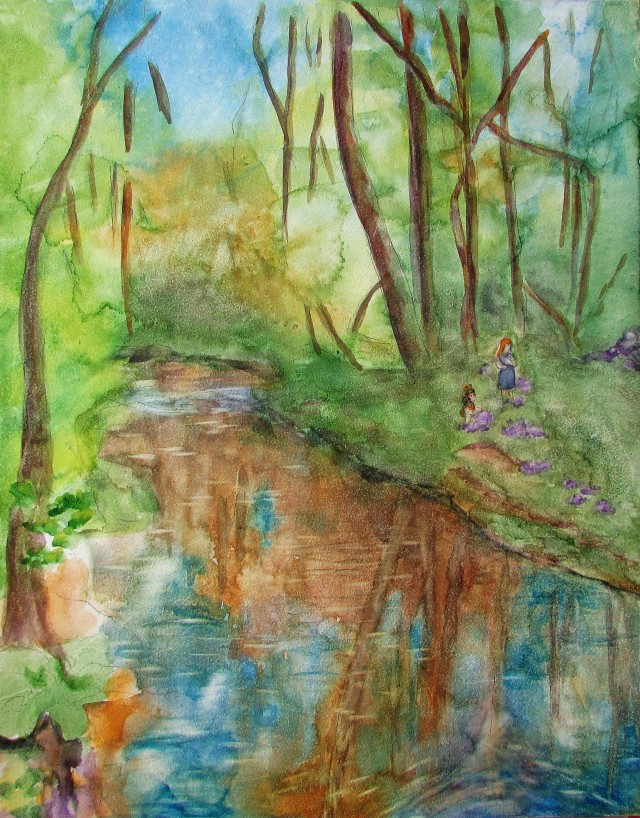 I have a few Sepia tones in this unfinished watercolor. The watercolor, a painting of the creek that runs near my home, has been untouched for months. Why? This might sound strange, or perhaps you can totally relate, but I am so pleased with the form and colors to this point, I am terrified to touch it again in case I mess it up. This came about because the last thing I attempted to paint, or should I say, fix in the painting, was the reflections of the tree trunks in the water, and they gave me a devil of a time. Now, I am afraid to go back into it with my brushes because I don’t want to risk losing what I have done thus far. How silly you are probably saying, and I am saying it too. Perhaps this confession will lift the fear, I’ll laugh at myself and continue on. I wonder if this is why some paintings in museums tend to look not quite finished. Perhaps the artist was afraid he was going to mess it up if he continued. I’ll update…one of these days…when the painting is finished. Sigh….